WAYNE Brady is recognized by audiences for his variety of hosting gigs and comedy routines.

Due to his popularity from Whose Line Is It Anyway? and Dancing With the Stars, viewers are curious to know more about Brady.

Who is comedian Wayne Brady?

Born on June 2, 1972, Wayne Brady is an American comedy star and television personality from Columbus, Georgia.

In 1998, Brady began regularly appearing on the improv comedy show Whose Line Is It Anyway?

For his work on the program, he won an Emmy Award for Outstanding Individual Performance in a Variety or Music Program in 2003.

While starring in Whose Line?, started hosting his own eponymous award-winning talk series on ABC.

Read More on Whose Line? alums 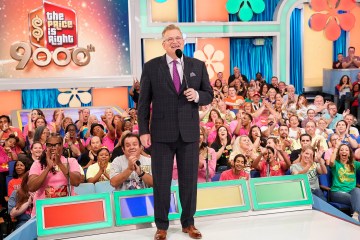 What to know about Drew Carey from The Price Is Right

From 2001 to 2004, The Wayne Brady Show aired for three seasons before going off the air.

In 2006, the comedian took on a recurring role in How I Met Your Mother opposite Neil Patrick Harris.

Prior to Niecy Nash earning her gig on Don’t Forget the Lyrics!, Brady hosted the game show from 2007 to 2009.

Following his stint on Don’t Forget the Lyrics!, he took over as the presenter of Let’s Make A Deal.

most read in celebrity

From Let's Make A Deal to DWTS, an inside look at Wayne Brady's career

What to know about Lil Durk's fiance, India Royale

His list of guest roles includes The Bold and The Beautiful, Everybody Hates Chris, and 30 Rock.

What is Wayne Brady’s net worth?

In the wake of his first accolade from Whose Line?, Brady won four more Emmy Awards.

In 2009, he was nominated for a GRAMMY for his cover of Sam Cooke’s A Change Is Gonna Come.

According to Celebrity Net Worth, the TV personality accumulated an estimated fortune of $12million.

Where is he now?

Decades later, not only is Brady still starring in Whose Line? – he’s one of the program’s executive producers as well.

In addition to both TV gigs, his list of endeavors continues to grow as he is also a competitor on the 31st cycle of Dancing With the Stars.

In the fan-favorite reality series, he is partnered with DWTS’ season 19 champion Witney Carson.

DWTS isn’t his first time on a reality TV competition, he was crowned the winner of The Masked Singer’s second season.

Vanessa Feltz moved to tears as she contemplates ‘finality’ of Queen’s funeral coverage: ‘It’s all a bit much’

Handbagged brings poignant yet playful take on Queen vs Thatcher

Who is YouTuber Miniminter and when did he join The Sidemen group?