The Last Leg’s latest World Cup parody has sparked a mixed reaction after the lyrics addressed the execution of gay men in Qatar.

After it was confirmed that this year’s FIFA tournament would be held in Qatar, the decision has been met with intense scrutiny, due to its criminalisation of same-sex relationships.

There’s also a severe lack of rights for women, and more than 6,000 migrant workers have died since the country was awarded the World Cup 10 years ago.

The latest installment of the Channel 4 show concluded with a parody of David Baddiel and Frank Skinner’s 1996 classic Three Lions.

At the beginning of the song, frontman Adam Hills is head singing: ‘Everyone seems to know the score, but we just can’t ignore dead workers on the floor.’

Last Leg regular Jess Robinson added: ‘So many jokes, so many sneers, but they’ll jail you if you’re queer, and we’ve known it for 12 years.

‘But in Qatar if Alan Carr toured and was joined by Boy George and then even RuPaul, they could end up three heads on a spike, meanwhile Beckham’s grinning.’

Viewers have blasted the ‘distasteful remix’ online, with one writing: ‘Can I sue everyone involved in this for intentional infliction of emotional distress’

One person wrote: ‘They thought this was funny to broadcast in the same week that five LGBTQ+ people were murdered. Whether it’s cheap point scoring like this, or shamelessly pandering during Pride season, always remember that our lives—our sex, pain, anger, love, blood—are abstract to them.’ 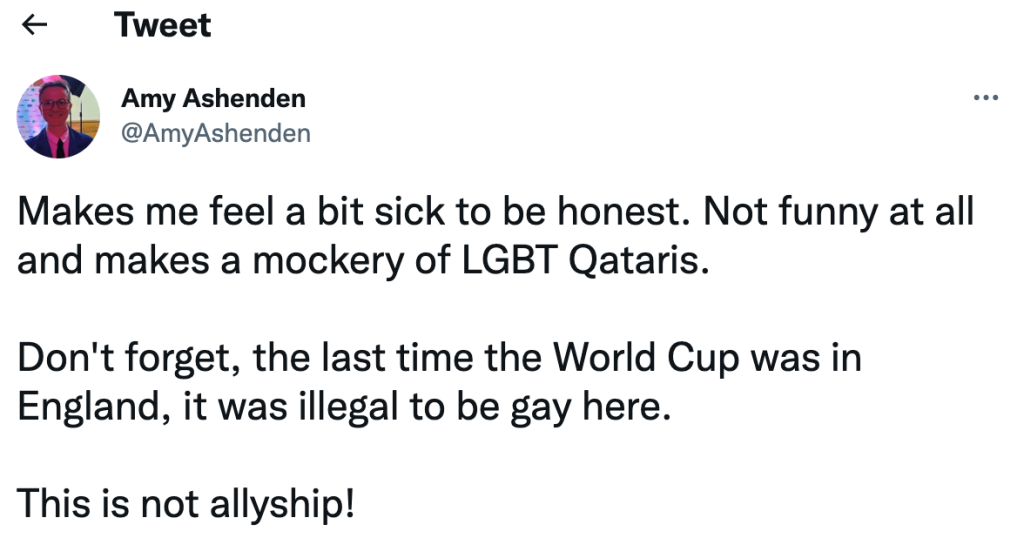 ‘This is vile. What the hell going on,’ another added.

‘I have an exceptionally dark and clapped sense of humour so actually don’t mind politically grim content in jokes per se. I just object to this aesthetically – it’s really lazy & crap satire,’ another echoed.

Key figures and performers have been met with criticism due to their involvement in this year’s global event.

David Beckham signed on as an official ambassador for Qatar during the World Cup but his support has been controversial, with critics highlighting the human rights scandal involving the country.

Comedian Joe Lycett urged David to walk away from his ambassadorship with Qatar, reportedly worth £10million, but he refused to buckle to the deadline.

As a forfeit, Joe appeared to go through with his promise to shred £10,000 in cash unless David stepped down.

However, the Great British Sewing Bee host has since confirmed that it was a stunt and he instead shredded David’s Attitude magazine cover from 2002.