STORMZY has made plenty of showbiz pals over the years – and now he’s put his star-studded phone book to good use.

The grime artist has dropped a surprise new single accompanied by a celebrity-packed video.

The 11-minute film for Mel Made Me Do It includes a monologue voiced by I May Destroy You’s Michaela Coel and there are plenty of others on screen, too. 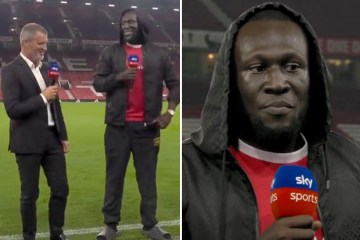 Former footballer Ian Wright made an appearance in the video[/caption]

There is even a tribute to late music entrepreneur Jamal Edwards, as his mum Brenda, a Loose Women panellist, is in the video holding a photograph of the SBTV founder.

It was so hard juggling everybody’s schedules for the filming that the video has actually been in the works for six months.

I told in April that Jonathan and Louis had been approached to appear in the promo, when some scenes were shot in London’s National Portrait Gallery.

But it took months to pull together other sections of the lengthy — and expensive — video, which has already racked up more than a million views.

I'm so pretty, women hate me… some don't understand how hard it is being me

One person who isn’t included is Wiley, following the pair’s spat in 2020.

In fact he takes a pop at Wiley — who has been dubbed the Godfather of Grime — in the track, by rapping: “You old wash n****s should retire for real, there’s a time you should move and a time to be still.

“There’s a time to destroy and a time to rebuild. But all I see is washed-up godfathers.”

The single is expected to feature on his as-yet- untitled third studio album which, during his tour in March, he said would be out this year.

There can’t be long to wait now.

KANYE WEST hasn’t half flogged some tat in his time.

In my eyes, most of the clothes he designs look like something you’d buy at a scuba diving shop.

But I can’t help feeling he is really just screwing his fans out of every penny he can get after putting a black keychain on sale costing £50.

The Yeezy item has been “engineered by Balenciaga” and is being sold by Gap, despite Kanye slamming his partnership with the store for weeks on Instagram and announcing that they’d split.

The keychain looks like a standard office lanyard. That won’t stop billionaire Kanye, though, who is also charging £9 for postage or £18 via airmail.

And as if he hasn’t put everyone through enough, the rapper has also said he still wants to become a politician, despite a failed run for US President in 2020.

Asked if he has aspirations in politics, Kanye said on US telly: “Yes. Absolutely. That time wasn’t in God’s time.

“I’m sure there’s lives that were saved. I’m sure God had me fall on the sword and say, ‘This is not the time,’ but you know, he’s a redeemer.”

ARCTIC MONKEYS are hot favourites to headline Glasto 2023 after announcing a tour with a gap during the festival weekend.

The band, led by Alex Turner release album The Car next month and yesterday revealed 13 shows, kicking off at Bristol’s Ashton Gate Stadium on May 29.

MADONNA and Lil Nas X are both used to scoring No1s – so I imagine she was shocked when he cut short a chat to have a No2.

The Industry Baby singer confessed he couldn’t talk to Madge for long when the pop icon came backstage at his show in New York this week, as his nerves before a show make him rush to the loo.

Lil Nas X had a memorable first meeting with Madonna[/caption]

He said: “It was a full-circle moment because she brought me back to her show in 2019. So yeah, that was cool.

“I didn’t actually get a chance to get a good conversation with her because I was about to go out on to the stage. And as I told you earlier, I have to s**t from nervousness.

“That’s exactly what I had to tell her when I went out on to the stage.

“But she told me she’s going to be there and rooting for me and stuff like that.

Battle of the bands

HEATHER SMALL will be performing at a battle of the bands competition in support of children’s charity Variety.

Variety Rocks is hosted by Phats & Small’s Ben Ofoedu and takes place at London’s Ministry of Sound on October 13.

Bands made up of the charity’s corporate supporters will compete.

NICOLE SCHERZINGER has the power to be in two places at once.

The Pussycat Dolls singer wowed in this red gown as she promoted the latest episode of America’s The Masked Singer, for which she is a panellist.

But while sharing photos of herself on that, she was actually in an entirely different continent – enjoying the sights of Milan Fashion Week with her boyfriend, former rugby player Thom Evans.

Nic appeared to channel former US First Lady Jackie Kennedy in the statement red dress, along with her immaculate brunette locks.

She posted the picture with the caption: “Lookin like she ’bout to run for presidency.”

Aside from trying to unmask celebrities in wacky outfits, Nicole has been busy on yet another romantic getaway with Thom – to Portugal
She could be swapping that red dress for a white one very soon . . .

Lewis: Cannabis made me freak out

The Forget Me singer has revealed doctors gave him the oil, which included THC – the psychoactive part that makes people feel “high” – to help combat his anxiety.

But rather than calm him down, Lewis was left frantically Googling what to do if you take too much of the liquid.

He said: “I’ve started taking this cannabis oil. I got it medically prescribed to help with my anxiety.

“I’d never tried it before but it has THC in it. I took the second drop as prescribed and I freaked the f*** out. I don’t do that kind of stuff and I absolutely freaked. I was in my room by myself and I was hearing things. I thought I could hear voices.

“I had to search YouTube videos to find out what to do if you’ve taken too much cannabis oil. “It was mad. It was f*ing intense.”

Explaining how he’s now trying to live a more healthy lifestyle after struggling to cope with fame, Lewis said during an Instagram Live yesterday: “That is just my life. I am eating salads.

“I am just trying to get the mind and body right. That oil is no joke though.

“I didn’t know you could get high off it. I felt absolutely nuts.”

Ozzy Osbourne vows to perform on tour amid devastating health issues: ‘Even if I have to be nailed to a board and wheeled on’