MADONNA has left her fans in shock with her raunchiest ever music video – as she simulates a sex act with a female rapper.

The pop singer released her new song Hung Up on Tokischa alongside Dominican rapper and sexual content creator Tokischa this week.

Madonna and Tokischa shocked fans with the raunchy video[/caption]

Madonna, 64, was seen dressed in a tight-fitting black corset and velvet red shorts in the music video for the track.

She wore her long auburn tresses flowing down and a minimal palette of make-up as she danced among a crowd of women.

The remix of her song Hung Up – originally released in 2005 – sees her dancing sexually for the camera with Tokischa.

The pair stick out their tongues at one raunchy moment in the music video as they pretend to kiss each other and lie each other down. 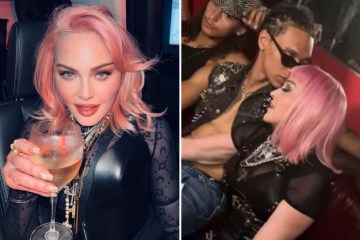 Madonna, 64, cosies up to rumoured lover, 23, in matching leather outfits 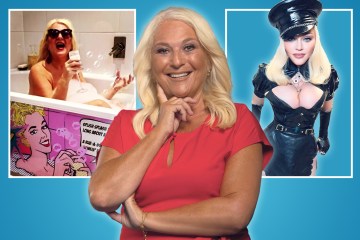 If Madonna wants to show her a**e at 80, let her, says Vanessa Feltz

Fans were left in shock at the raunchy scenes, which sees the rap star lay her hands on various parts of Madonna’s body.

The mother-of-six also placed her tongue in the rap star’s mouth before placing her hands on her behind in another shot.

Taking to the comments of the video, one fan hit back against the raunchy video: “Much as I love you, this is not for me.”

Another chimed in: “What happened to the trend setter, always ahead of the curve? Please get back to what you do best.”

Taika is the love of my life, says Rita Ora as she opens up about her man

I got addicted to exercise after beating drink and drugs, says Matt Willis

“I love Madonna, but this video is… I miss you Madonna,” a third said, while a fourth added: “Gross! Check please!”

“I’m glad Madonna is having a great time. She deserves it. But I’m not a fan of this music, look, or video,” a fifth concluded.

Others showed their support for the video, calling Madonna “beautiful”, “sexy”, “hot” and celebrating her “freedom”.

“This is HOT Madonna,” one simply wrote, as a second chimed in to agree: “Wow! Beautiful and amazing. I feel proud of you.”

The pop singer, who separated from American dancer Ahlamalik Williams, 28, in April – cosied up to the new man.

The Material Girl singer was reportedly seen “cuddling” the handsome model over the weekend, after first locking lips in a racy photoshoot for Paper magazine last month.

Earlier this year, reports said that Madonna had ordered her team to find her a new toyboy lover after her split from Ahlamalik.

A source told Heat: “Madonna has zero interest in dating someone her age.

“The thought of grey hair or wrinkles is a massive turn-off. What she wants is a hard-bodied, hot guy in his late twenties – someone who can keep up with her.

“She has requested that her team find her a handful of options – after signing a watertight NDA, of course.”

Strictly Come Dancing: Celebrities that said no to being on the BBC dance competition

Who is Behati Prinsloo?