Lauren Goodger has wowed fans with a slim new look and vowed to ‘feel sexy’ again after embarking on a new fitness regime.

The 36 year-old former Towie star has been showing off the results of her hard work on social media over the last week and has revealed in a new interview that she wants to totally transform herself.

Lauren on a recent night out with pals, showing off her newly svelte figure[/caption]

Lauren plans to have her breast implants removed soon[/caption]

Speaking to new! magazine, she told all about her plans to change her body and get her breast implants removed.

“I want to get a bit slimmer and then I’ll get my implants out. I’m over big boobs and big bums now. I’m so over that look.

Lauren, who is mum to daughter Larose, one, explained that she is also back on OnlyFans because the racy platform boosts her confidence. 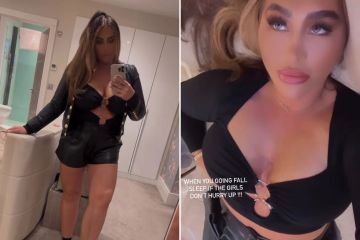 “It’s something I enjoy doing because it does makes you feel sexy,” she revealed.

Lauren has been through a devastating time in the last year after losing her second child Lorena moments after giving birth.

The newborn was born with her umbilical cord around her neck.

She admits that she struggled to eat in the wake of the tragedy as she was battling grief but is now working with a personal trainer in a bid to look after herself.

The star says she is now eating “smaller portions”, cooking from scratch and doing body weight training with her PT Lotan Carter.

Lauren says this involves “lots of squats, lifting balls, stretches and then boxing.”

The added benefit has been a boost to her mental health.

“I’m a warrior and I always have been my whole life,” Lauren added. “I’m a survivor – and I want to be strong for Larose.”

Lauren has said she will be strong for daughter Larose[/caption]

People outraged after millionaire restaurateur Salt Bae boasts of £141,902 bill amid the cost of living crisis

Piers Morgan calls out England team for backtracking on OneLove armband decision: ‘I’m not gay, but if I was I’d be furious’

Who is Mollie King and does she have children?