KATIE Price today showed off her arm tattoos in a skimpy pink top and shorts as she continued to enjoy her holiday in Thailand.

The former glamour model, 44, recently headed over to the Southeast Asian country with fiance Carl Woods.

Katie Price flashed her tatts while she enjoyed her holiday[/caption]

Katie is on holiday with her man Carl Woods[/caption]

The former glamour girl is in Thailand[/caption]

Katie showed off all her body ink as she headed out for dinner in the luxury resort.

The tight pink bodysuit was flared at the sleeves and revealed her huge arm tattoo that she actually had done in Thailand earlier this year.

Pricey finished off her holiday look with a pair of pink heeled crocs.

She wore her long hair loose, which went all the way to her wasit. 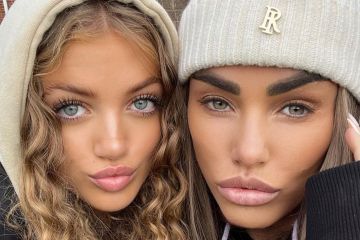 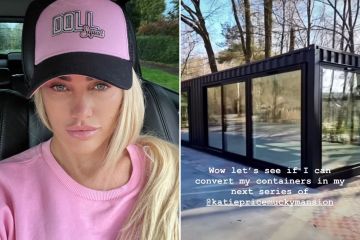 Katie looked like she was having a great night, and could be seen packing on the PDA with her man Carl.

At one point her cheeky boyfriend placed a hand on her bottom.

Katie’s arm tattoo features flowers and a crown, and were inked over where her ex-husband Peter Andre’s name was once placed.

It once said ‘Pete’ surrounded by hearts but was then crossed out and later covered with a picture of a rose after the split.

Her other sleeve tattoo, the first of the two done in Thailand, covers her left forearm in flowers in what is thought to be a tribute to her terminally ill mum Amy.

KP is a big lover of body art, and boasts a HUGE selection of tattoos.

Her most famous has to be her garter inked around her thigh.

Katie, who was once known as Jordan, once explained how she loved feeling sexy in her underwear so wanted something on her leg to make her feel great all the time.

It is now one of her most famous tattoos.

Katie also has the initials H and J inked on the back of her neck.

Secret symbol spotted on Toblerone bar by boy, 10 – here’s what it means

They are there as a tribute to her sons Harvey and Junior and are coloured red and black.

The body art can be seen when her hair is up.

Katie also showed off her tattoos in this holiday snap[/caption]

Who has Rita Ora dated?

Adele freaks out as Shania Twain subtly disguises herself during Las Vegas gig: ‘I would have self combusted’